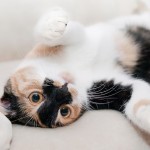 “There’s a whole world of cat lovers out there” said Susan Michals, a cable TV producer and creator of CatCon. Modeled after Comic-Con, the 1st CatCon drew more than 10,000 people into a Los Angeles convention hall. Around 700 folks waited in line for a 9:00 a.m. opening on Saturday, June 6. Two cats, L’il Bub (YouTube videos have been viewed 27 million times) and Pudge (373,000 Facebook likes) were at the festival to meet and greet. With the adoration of cats on the Internet, Ms Michals has attempted to create an offline feline-loving community.

Kitty and Tiger, cat characters in BessBooks, have lots of company.